We’ve made some progress over the past couple of weeks working on Slottown – in large part due to having a bit of time off work for the holidays, as well as having some cold, wet weather, layout building and train running has been high on the agenda.

First up, I built some display shelves to line the layout and store unused rolling stock and locomotives.  This was my first attempt at building proper display shelving and I had quite a bit of assistance from a fellow model railroader, Shop 13. He was kind enough to lend me his tools, time, and most importantly, his expertise to help me build my display cases. We sourced our wood from the local big box store, where the frames are made from 1x5x8 pine, the shelves out of 1x4x8 pine, and the rear backing using 1/4″ thick sanded plywood.

We used a table saw to cut two 1/8″ thick grooves 1/4″ apart on each 1×5, which will eventually be the “tracks” for clear acrylic sheets that will slide back and forth as transparent doors.  We then used his mitre saw to cut each piece to length, then finally we used his Kreg system to create pocket screws to better conceal the screws and ensure 90 degree joins.

I brought all of the cut wood home, then stained it using my favorite stain, then painted the plywood backing white on one side.  I still have yet to order the acrylic sheets for the doors, but the shelves are in-place and being put to good use: 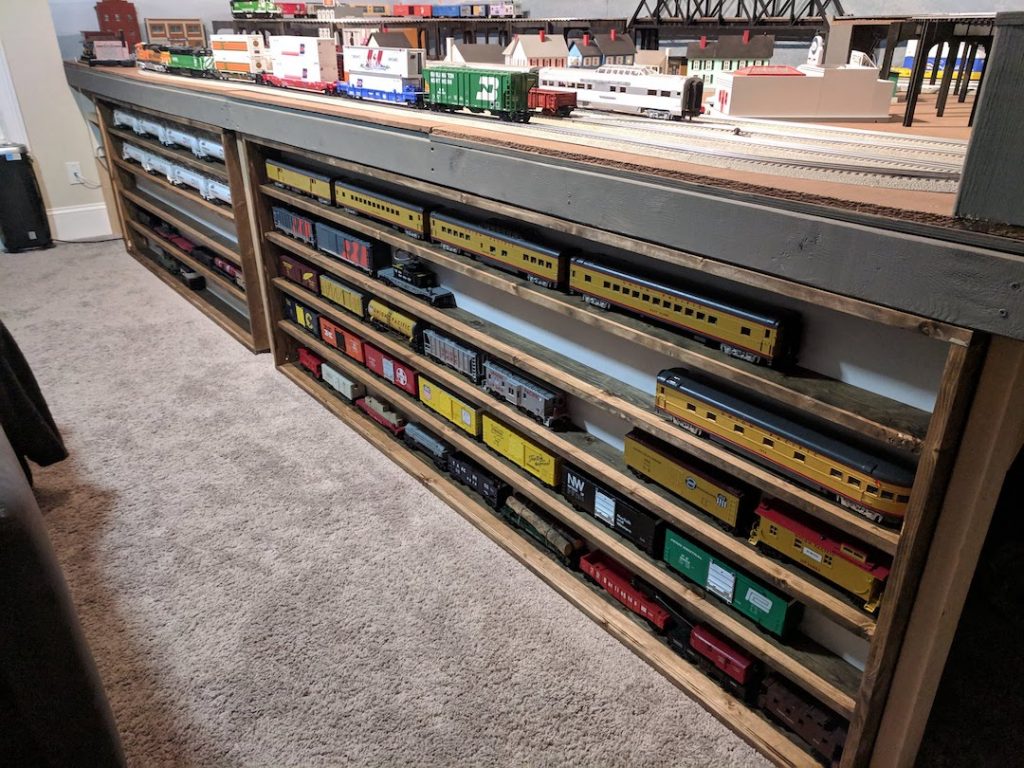 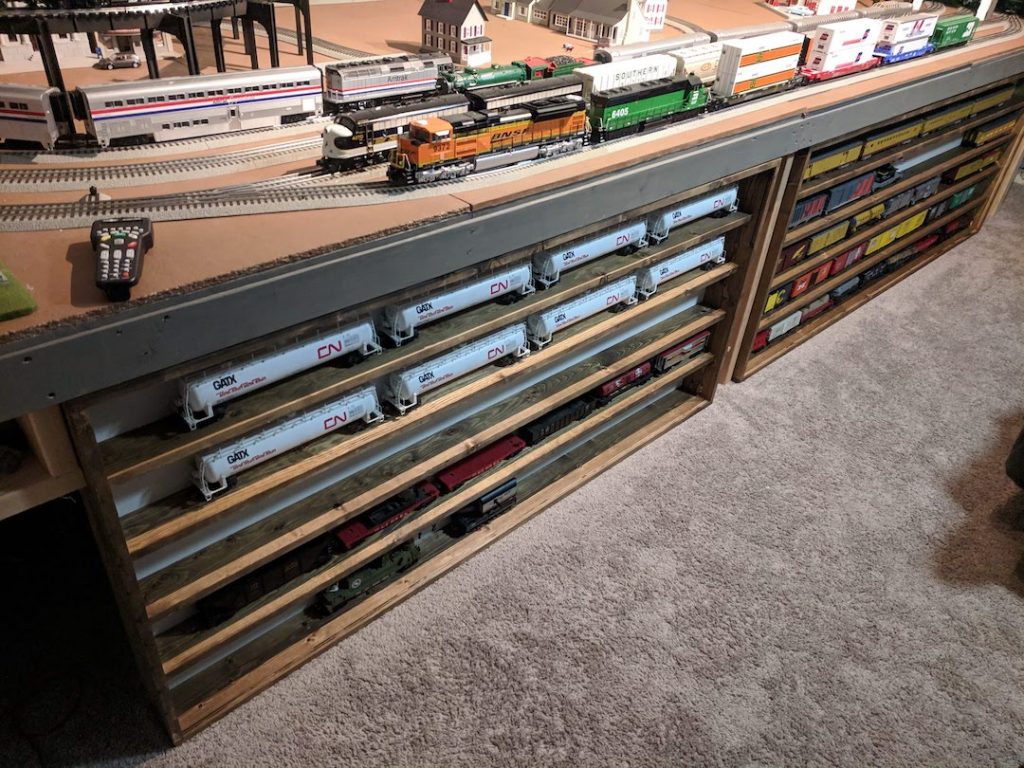 After my BNSF trip for work (see previous post) I was inspired to add some more BN/SF/BNSF rolling stock to the collection. My local hobby shop just happened to have a new MTH Premier BN GP38-2 on the shelf, for which I was smitten. I’ve brought it home and have been enjoying running it, however there appears to be some kinks with the DCS and protosound board.  I’ve been troubleshooting it using factory and feature resets, for now it’s running well but I’m keeping a close eye on it: 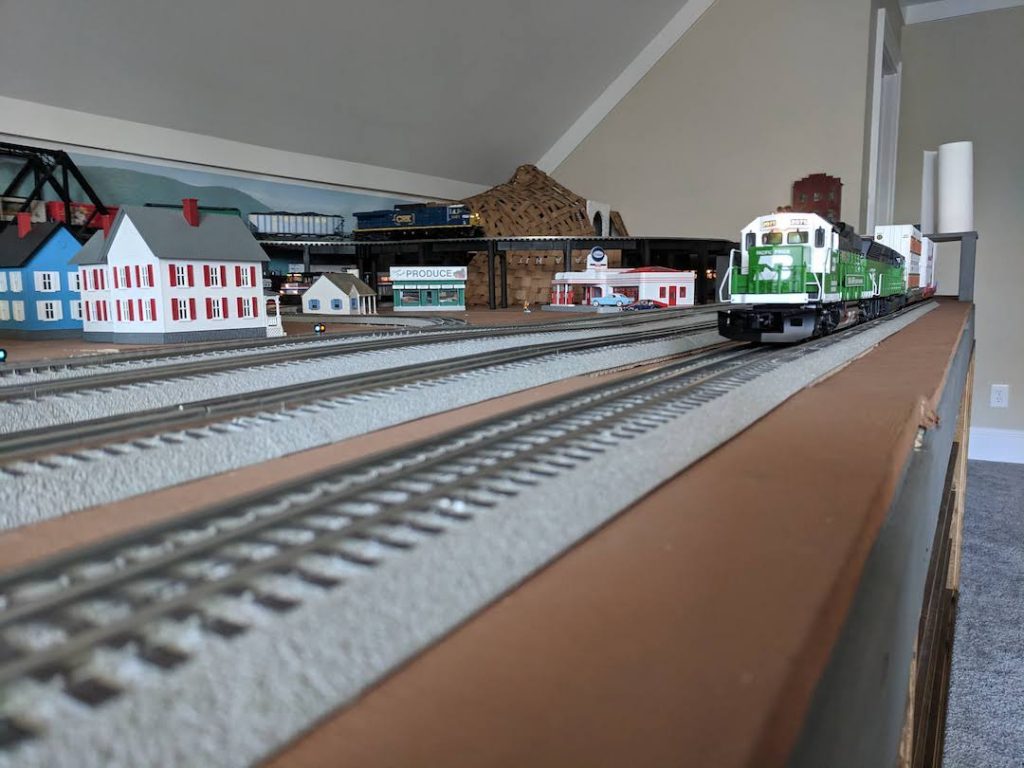 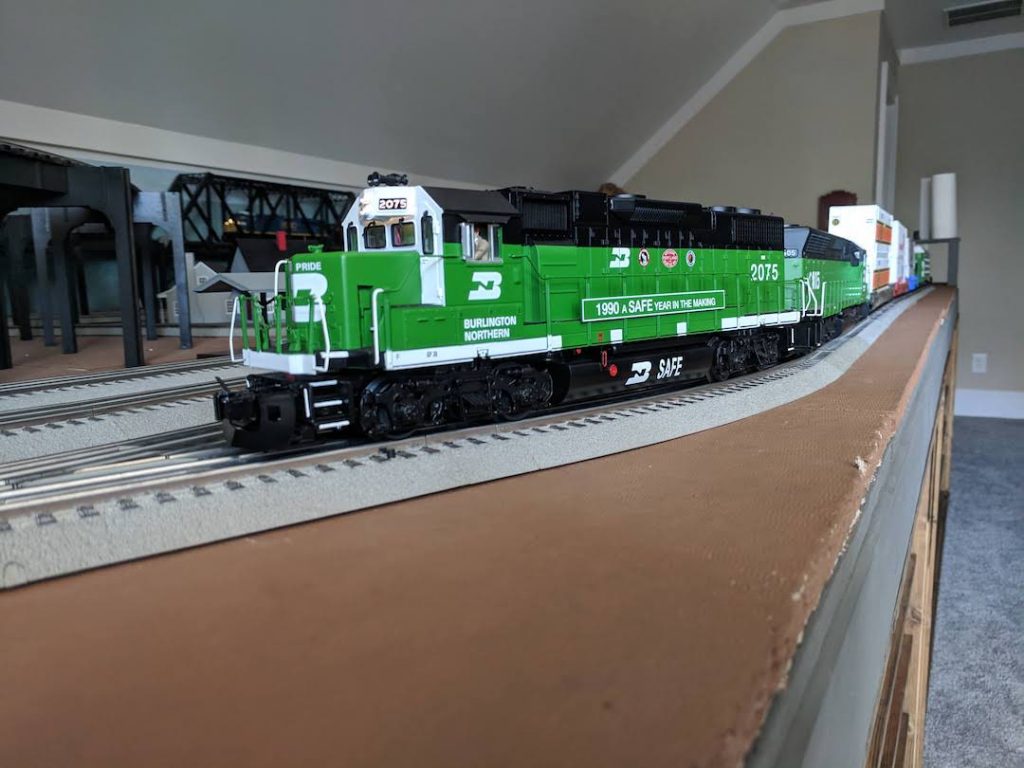 Lastly, we’ve finally dived in on our mountain/tunnel project, where I’ve built a 3rd level platform and ridge line out of wood, which we then used to anchor a cardboard weave, soon to be covered with plaster cloth hardshell.  While I completed the wood support aspect, Lydia was the primary geologist who created the cardboard weave.  We’re aiming to apply the hardshell this or the following weekend: 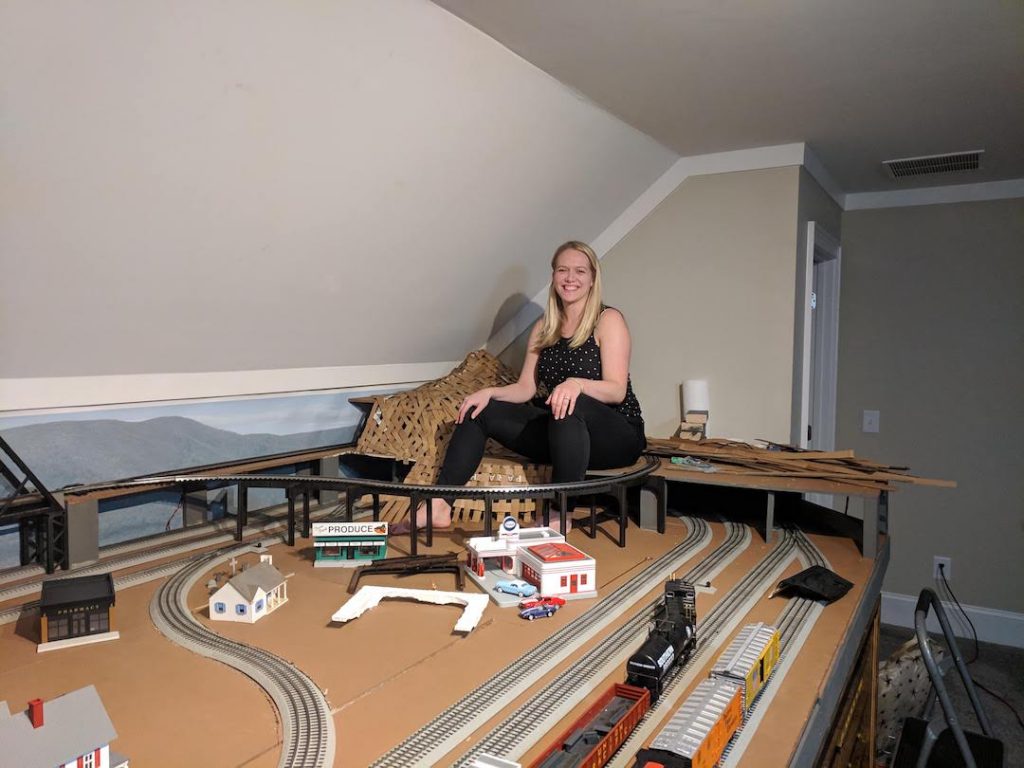 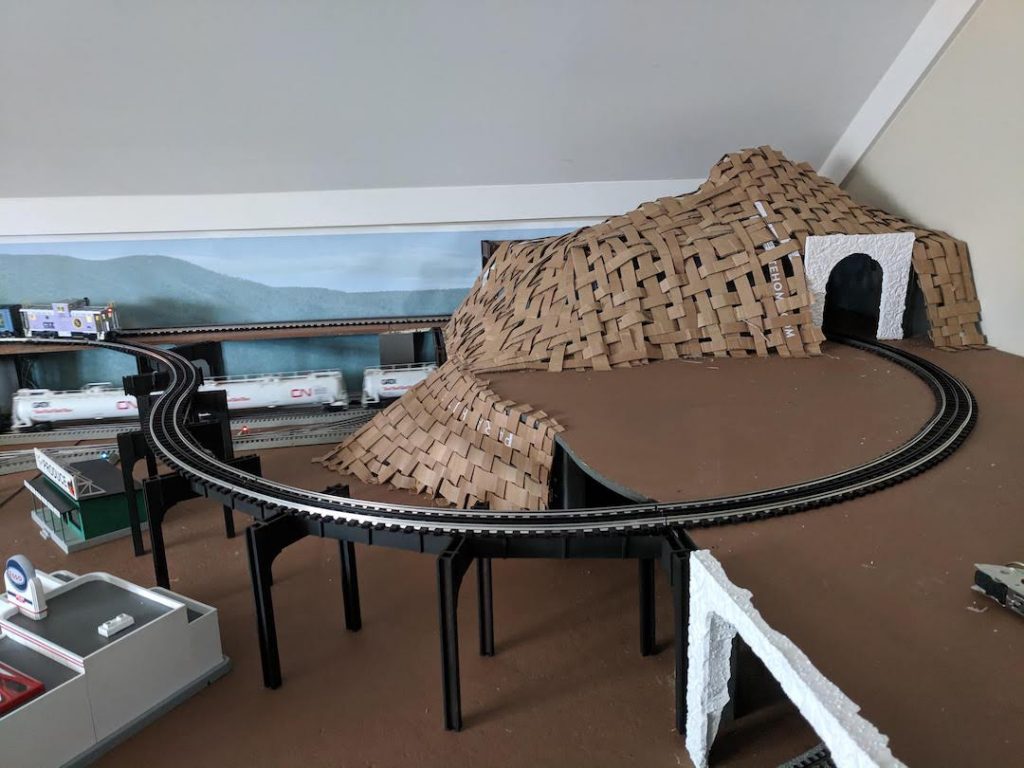 We also took a stab at creating custom tunnel portals using hydrocal plaster and foam molds. The results are mixed – the good news is we’ve cast them to the width and height clearances we needed, the bad news is the plaster still needs to be etched and painted, which is a fair bit of (messy) work

In mid-December, I had the opportunity to head out to Kansas City, MO for BNSF to install some IT equipment in their Kansas City intermodal yard which will host workloads that control some of the container cranes.  As part of the visit and because they know I am a train nut, the customer organized a yard tour of both their Argentine hump yard and the LPKC intermodal yard.  Since I am not a BNSF employee and have not undergone the mandatory safety training, I was not able to actually get on or in any of the locomotives or on the track in the yard, so most of my photos were from inside the vehicle. 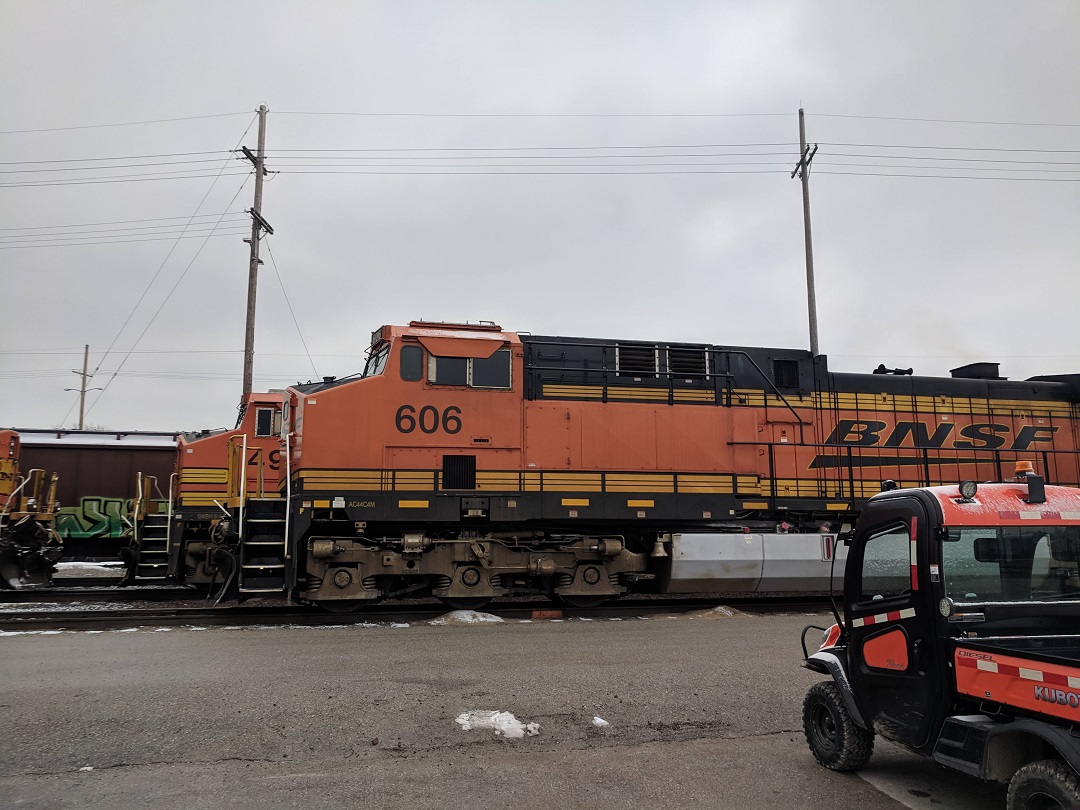 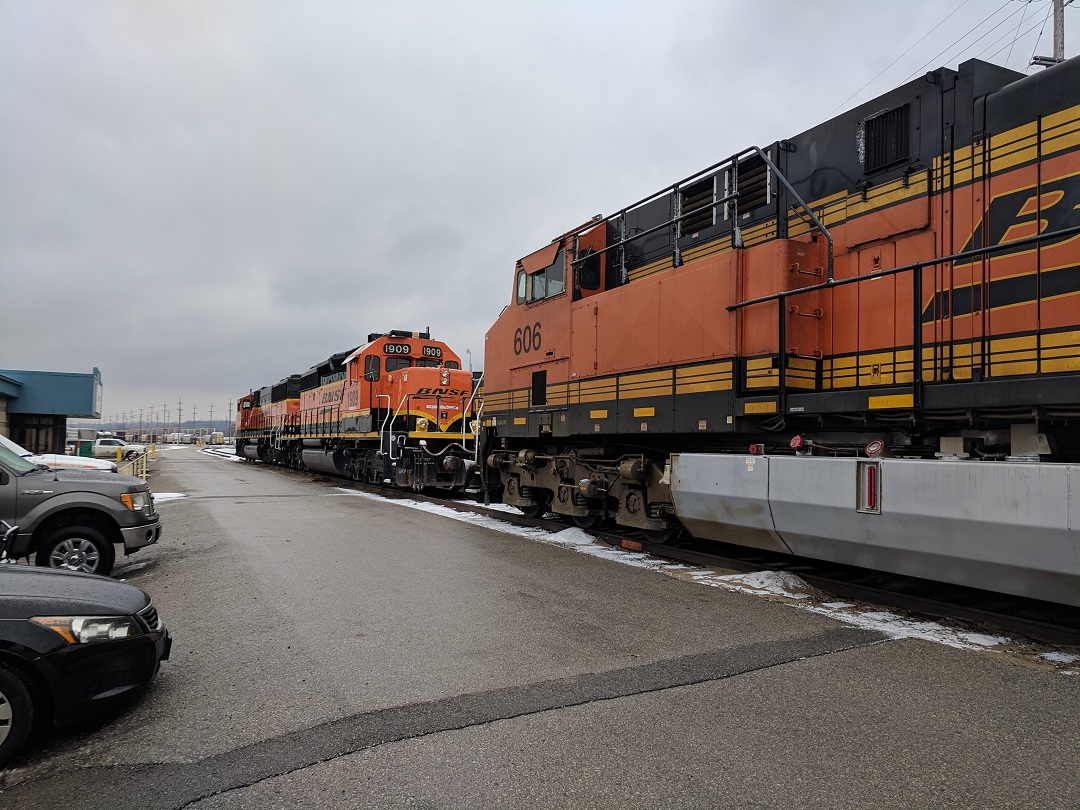 Me beaming in front of the Dash-9:

The hump yard was super interesting – the entire yard from the hump down to the sorting tracks is completely automated. As the cars approach the hump, each freight car is identified via an RFID identification tag. Any unreadable or unidentified cars are sorted to a designated inspection track to the side of the yard. All cars are then weighed and counted, then released at the top of the hump.  Gravity does all of the work from there on out along with a series of retards that “pinch” the flanges to slow the cars down.

The car(s) need to end up on the correct sorting track and ideally at a coupling speed of 3-5mph, which is a function of car weight, number of curves where the cars may lose momentum, distance for which the cars need to travel (as sorting tracks fill up when they build trains, the distance reduces). They measure where the last car on the sorting track using electrical signals through the rails.  The last car’s trucks “short” the signal and the distance along the track can be calculated.

The yard and hump is graded and surveyed extremely accurately, so the system “knows” the speed at which the car(s) need to travel through the yard and when they should reach each checkpoint, however other factors such as wind speed and direction, precipitation, load aerodynamics, wheel bearings, etc can result in the car(s) deviating from the ideal speed based on the algorithm.

As the car(s) move through the yard, their speed is measured at set points using radar (similar to what Police used to use before switching to laser speed detection), and the appropriate amount of force applied to the retarders is calculated to determine how much speed to shave off.  Note that cars can only be slowed down (never sped up) so it’s critical that no more than necessary is shaved off. The yard control system is so intelligent that the retarders are actually applied while the wheels are moving through them at different times to even the wear on the retarders themselves.

If all goes expected (which happens the vast majority of time), the cars are sorted into the correct sorting track, couple at around 5mph (although admittedly they have tolerances up to 7, since it’s better to err on the side of speed) and trains are built.

In the event that a car is sorted incorrectly (less common), a knuckle left closed, or a brake was left on (more common), they will temporarily pause operations and send a switching locomotive out to move the car.  Most of the switching locomotives are remote controlled as well with a big remote that an engineer straps on and can control while on the ground.

I wasn’t able to take any photos within the control room since the system is proprietary, but it also speaks volumes to BNSF as an organization – they deployed their own hump yard control system entirely in-house and the system is incredibly impressive.  They are currently rolling out the updated system to hump yards across their trackage.

I wasn’t able to get any photos at LPKC due to where I was sitting in the vehicle, but here is a photo of the facility (not my photo – taken by BNSF Logistics):