The Universe of Slottown is confined to a space of 16′ x 7.5′ in the living quarters of it’s two deities, Phoenix and Mattrain. The devout 1:48 people of Slottown subscribe to a polytheistic religion where all that exists has been created by the hand of either Phoenix or Mattrain through intelligent design.  While both deities are firm believers in natural selection and Darwinian evolution, they found the progress of development of Slottown proceeding at pace far too slow for their liking.  Until The Divine Intervention, only airborne bacteria and perhaps the occasional fungi spore occupied the space that is known as Slottown – and while bacteria and fungi are very impressive organisms in their own right, they are not particularly adept at building model railroad infrastructure, at least not within the time horizons acceptable to the creators.

Slottown was first conceived in the minds of its creators in August of 2017 and plans were laid forth via computer-aided-design software to establish the bounds of the universe and the Divine Track Plan. Upon a number of iterations (speculated to be about five), a final plan was confirmed in October of 2017 that balanced the available space within the dimensions of the universe while maximizing the number of trains that can be run simultaneously:

And so on the date of 18 November, two-thousand and seventeen in the Common Era (C.E.) of its creators, the first 2×4 was laid and construction began: 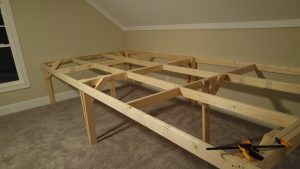 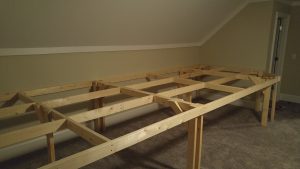 Shortly thereafter, the base for Slottown was completed and ready to begin hosting it’s tenants – namely the trains

Let there be light!

The initial tenants of Slottown are primarily railroad engineers, conductors, and passengers within passenger cars, as there are no living quarters yet available in Slottown, as the second level is still yet to be completed, which is a prerequisite for establishing roads, buildings, and vehicles.  Quick Slottown attributes are documented in the table below:

Welcome to trains.matt5lot10.com – a site documenting the construction and operation of “Slottown,” an O-Gauge model railroad set sometime between 1920 and 2018 located somewhere between North America and Australia. We here at Slottown embrace anachronism, creativity, and above all, fun – that is to say we don’t take ourselves too seriously. We hope you enjoy our website and our trains